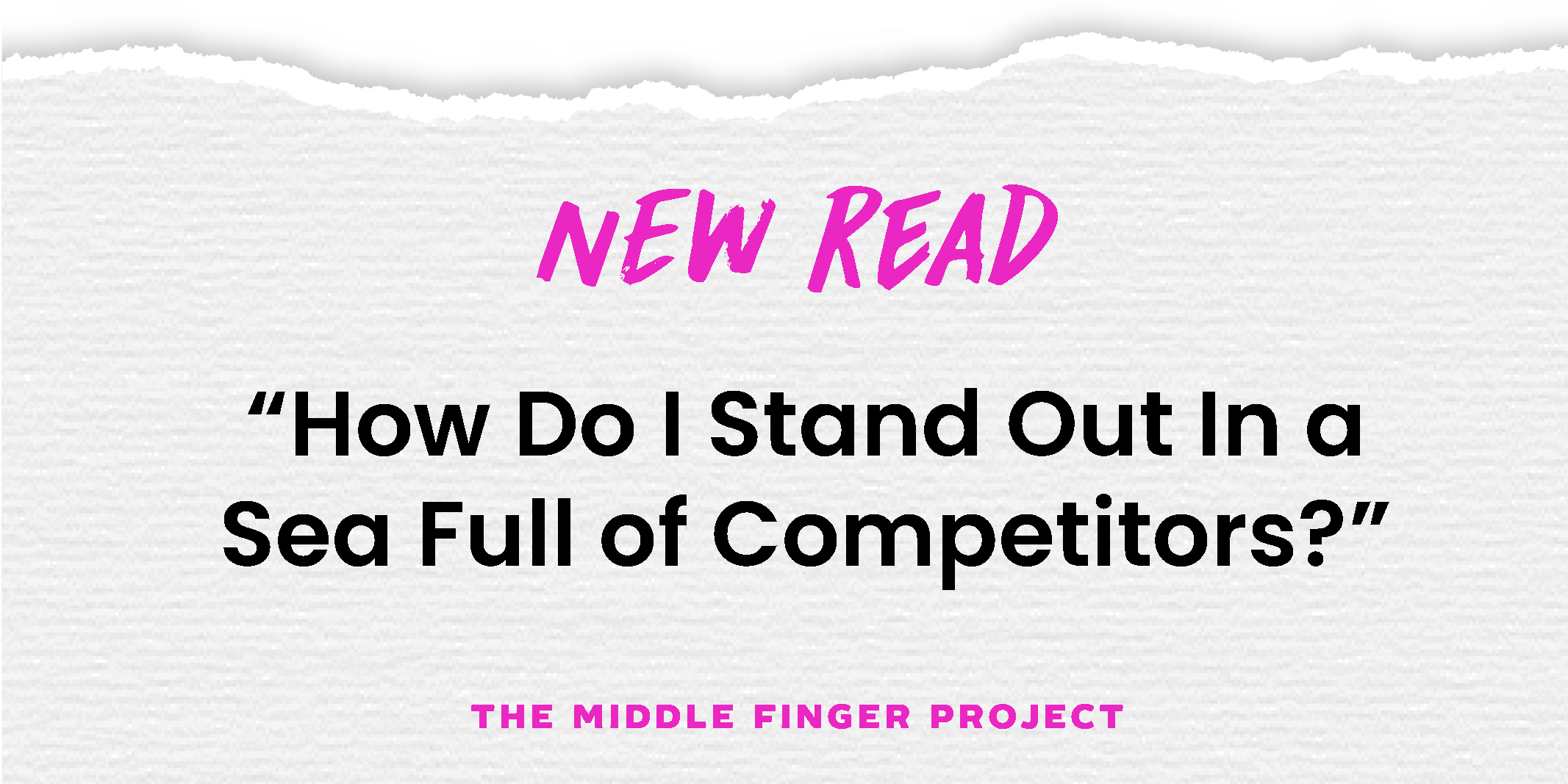 (A Really Good) Answer to, “How Do I Stand Out in a Sea Full of Competitors?!”

Last night we watched LOVE, SARAH, a movie on AppleTV about a dead woman's child, mother, and best friend all banding together to start the bakery of aforementioned dead woman's dreams.

The movie takes place in Notting Hill, London, which is obviously the first reason why I wanted to watch it. The second, however, was that I wanted to watch them do it—which is unfortunately not as kinky as it sounds, but alas, as someone who is obsessed with business building the way most people are obsessed with Nutella 🤮, I couldn't resist playing the voyeur.

^I CANNOT GET ON BOARD WITH NUTELLA. It might be the name. I'm a “good name, bad name” kind of person, and this to me sounds like the perfect brand for squirrel food. You could see it splayed across a bag of bird seed, right? That's what this name is for. “Nutella: A tantalizing new treat by your friends at Purina.”

SO ANYWAY. What I'm about to say is going to be a bit of a spoiler, so read at your own peril but I just cannot resist writing to you about this because it's the perfect example of everything I've been talking about for yeeeeaarrrrssss! Years, I tell you! Years, Susan! (There's got to be somebody on this email list named Susan. HI, SUSAN!!!!!)

So what happens is this:

This is what I call “finding your edge,” and I've been talking about this endlessly for twelve years now (can you believe The Middle Finger Project has been in business for TWELVE YEARS?!).

You don't have the budget to do that; the nature of online marketing requires that you have an edge. Something you can hang your hat on, that other people can associate with you. It's the only way you can stand out from the crowd without a multi-million dollar marketing budget and gather enough traction so perhaps LATER you can expand, but for now?

You need an edge.

And that's because they don't understand that in limiting the scope, you're amplifying the love.

Because I can tell you what: if I went to any city in the world, and I saw a Frank's Hot Sauce Café? You better believe you wouldn't be able to hold me back! I WOULD STOP TIME! I would interrupt whatever we were doing, and I would be BARRELING TOWARD THAT CAFÉ AT 100MPH, because I would HAVE to go to that café. Even if I wasn't hungry. Even if I was on a schedule. I would have to go in. And that is the power of finding your edge: other people can finally see you.

Were the name of that café something entirely different, like “Martha's Kitchen,” I'd never have a reason to go in there. Yes eventually I'd be hungry, but then it would be a choice between Martha's and 1,000 other restaurants I can choose from—which means that Martha's isn't actually even in the competition:

You need to give your clients and customers a reason to get excited about you. The simple fact that you're in business isn't exciting to anyone but you. Those folks in the movie who were opening that bakery were so excited—but unfortunately, they hadn't carved out a reason to help other people get excited, too.

So watch the movie when you get a chance! See what I'm talking about. Figure out what your edge might be. Give someone a reason to see you. And then double down.

All you're really doing is helping the right customers focus.

Start a Boring Business—Not an Innovative One. (Also Filed Under: Business Advice I Never Thought I’d Give.)

I once met a guy whose job is to gut dead poodles and freeze dry their corpses—and I didn’t even get this luminary’s phone number. I know, the recklessness in it all! If I may offer some advice, anytime you meet someone with a business card that says, “We won’t turn your poodle into a […]

In: Confidence, Starting an Online Business

Life Coaching AND Boob Jobs? What To Do When You Can’t Pick.

If you’ve ever seen me after a vodka cranberry or two, you know the one thing I get heated up about the most is BUSINESS. I start saying snippy things like, “What moron wrote that on the sign?” or “Estelle Getty could have designed a better website,” or, “Who the hell wakes up and thinks, […]

We hear it all the time: FIND MEANING IN YOUR LIFE. It’s become the advice du jour. The magical solution to our woes. The on-call prescription for disappointment with life. The hope we hold onto when our own has abandoned us. In a sense, the search for meaning has become a religion of its own. […]

SIX-HUNDRED DADDIES. That’s my shorthand for “dollars.” I don’t know why or when it started. Actually, just kidding, it just started right now. Not because I have daddy issues or anything (though clearly I do). SIX HUNDRED DADDIES was what I paid. Six-hundred! And you know why? Because I just had to import a slab […]

When It’s Hard for People to Pick, The First Thing They Do Is Ditch

BLINDFOLDED PILLOW FIGHTS. That’s what people are resorting to. Putting their hoodies on backwards with the hood part over their face and then trying to whack their spouse with a giant down-stuffed rectangle as they bumble around the living room. (And somehow managing not to knock over the five-hundred porcelain gnome figurines, which I just […]

In: Pricing & Money, Selling Yourself, Starting an Online Business

Pet Peeves, Dried Egg Yolk + The Difference Between Having Freedom and Having OPTIONS.

So, I had this grand epiphany the other day. You see, I’ve always wanted a pet peeve. Everyone’s got a pet peeve. At least one. But me? Not so much. I’ve never really had a solid pet peeve of my own, which has clearly left me feeling pretty deprived. I mean, what kind of a […]

Hold all the pumpkin rolls: I’VE DONE IT, YOU GUYS. I’VE FINALLY DONE VIDEO. I’m pretty sure that giving me a camera was a very bad idea. Or a very good idea—I can’t tell yet. But I can tell you this—I AM HAVING WAY TOO MUCH FUN. For the love of a laugh, it’s called: […]

Death is weird. One minute you’re painstakingly slaving over the perfect Facebook status update, worrying about the new wrinkle in your forehead, and crying hysterically over the fact that you spilled a drop of creamer on the counter and WHY! CAN’T! ANYTHING! BE! EASY!, and the next, well, you don’t even have the privilege of […]

When Disaster Strikes, Do Not Be the A-Hole With the Credit Card Machine

So here’s a real pro tip: when you are wining and dining your brand new client, who has flown from New York City to London exclusively to work with you, and you’re trying to make a really sexy first impression, and you take her to a restaurant that’s been named one of Zagat’s number one […]

A Hot Sales Tip, A Hot Marketing Tip, and a Hot Book Tip Walk Into a Bar

Well hello there! A few fun tidbits on this fabulous Tuesday: Today I’m in studio recording DAY TWO of THE MIDDLE FINGER PROJECT audiobook for Audible—and my god, is this a blast! I’m documenting it all on my Insta-stories, in case you want to come behind the scenes with me. 🙂 There’s candy and drinks […]