How Being Unapologetic Helps Me–And You–Win At Biz

First of all, if you want teddy bears, get off this blog.

Teddy bears and hand holding is for other people. Here, we're about fresh ones right across the face. I don't have time for bullshit, and neither do you.–

Second, if you aren't going to take the quality of your life seriously, get off this blog.

I'm not interested in debating the merits of why you should or shouldn't start your own projects and pursue financial and creative freedom. You know what you have to do.–

Third, if any part of you finds me or the TMFproject community offensive, generally disturbing, or someone you wouldn't envision yourself having a martini with, get off this blog.

Only 24 hours in a day, baby. Choose who you spend your time with wisely.–

That said, today I want to talk about totem poles.

In general, totem poles were used to identify and stand for groups of people.

It's no surprise that totem poles don't exist anymore–what with the whole raping, executing, poisoning, burning and general massacring of the Native Americans.

But interestingly enough, they do still exist.

Just not in the same form.–

Today's totem poles aren't made from wood, and there's no bear heads, birds or porcupines carved into them.

Rather, today's totem poles are something we see every single day, without even realizing it.

Instead of obnoxiously large vertical logs with colorful carvings, brands now represent unity and pride. Stories and beliefs. Experiences. And brands identify and stand for groups of people.

Brands tell us stories about our place in culture–where we are, where we've been–and most of all, they help us figure out where we're going.

For us, brands are navigation and identity devices that we use not just to connect with other members of our tribe, so to speak, but to more deeply connect with ourselves.

When we select a brand, we're essentially putting up a little fucking flag declaring who we are, so we can more easily identify and be identified by others in our tribe.

We reinforce our own identity.

We make sense of the world, and our place in it, by choosing one over the other.

Even people who think they aren't brand shopping, and think they're price shopping, for example, are still putting up their own fucking flag, declaring something powerful about their values without even trying to.–

Brands are our modern day version of totem poles.

I regard myself as more of an athlete if I'm wearing Nike, and not some unknown brand.

I regard myself as more of a chef if I'm using Calphalon pans, and not some unknown brand.

I regard myself as more of a creative if I'm working on a Macbook, and not some unknown brand.

I even regard myself as more of a clean fucking individual if I'm brushing my teeth with Colgate, for goodness sake, and not some unknown brand.

Other people regard me more as those things, too–whether we like it or not.

What little fucking flag are you giving your potential customers?

Are you giving them any flag at all?

How are you helping them to reinforce their identity?

Because if you aren't…if you're wallowing on the sidelines, riding the fence, hesitating, afraid to piss someone off, then you're missing opportunities to connect with those who you'd really want to do business with, anyway.

That's the reason I can afford to say bold shit like I did in the beginning of this post.

In fact, it's the reason I couldn't afford not to.

So here you go.

A flag for you.

What I hope being a part of The Middle Finger Project community helps you reinforce about your own identity. You aren't just anyone; you're someone who's going to make it happen, come hell or high water. You're unapologetic. Perhaps afraid to try, but not too afraid that it stops you from actually trying. Not too afraid to hunt down the life you deserve. Not too afraid to live, more than you are to die.

You're not just Jane Smith. You're Jane Fucking Smith.

It's about time you remembered.

And it's about time the world knows it.

Here's to unapologetically chasing your fucking dreams. Because if you don't, who else will? 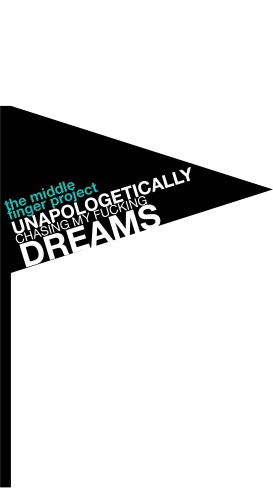 If you’re both killer & poet, YOU GET RICH.

Women Don’t Learn How to Be Strong & Confident & Brave in Home-Fucking-Ec.

Your Marketing Isn’t Working Because It’s an Arrogant, Selfish Blowhard.

Do It Or Dump It? A Note About Selecting Your Priorities Like a Badass Bitch.

Nine Freaking Months. That’s How Long It Takes to Make ONE Episode of The Simpsons.

“I Wish I Could Travel the World Like You”

You Are Stronger Than You Were Yesterday

The Three-Word Trick for Giving Your Content an Insta-Boner (Ooohhh, She Said The B Word!)

Working Yourself to DEATH: A Twisted Badge of Honor Reserved for The People Who Are Really Hurting

You Know the Best Way to Sell a Service? GATEWAY DRUGS, MY FRIEND.

Things Went Terribly, Horribly Wrong and Now My Client or Customer Wants…A REFUND. (#FML, WHAT DO I DO?)