I hate numbers–you can go square root your mom.

But sometimes, you've got to look at 'em. You know…like when it's tax season.

Just this past year I was pleased to see TMF alone pull a revenue of $151,040–most of which was profit, since online businesses carry very little overhead. 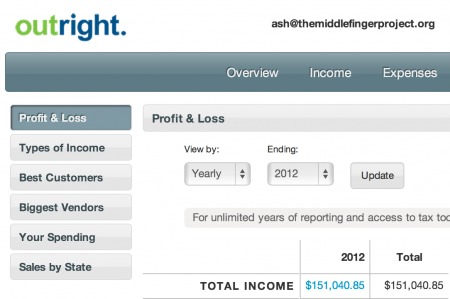 But that's the thing I've been thinking a lot about lately–grow how?

Too often, business owners measure their success against their bank accounts, cringing over missing zeros and celebrating only when they add one.

Because what I've really accomplished this past year, for example, can't be summed up in that $151,000–or any other income I generate.

What I've really accomplished was so much more than that.

And as I move forward in 2013, I'd like to think that my goals won't be driven by zeros–they'll be driven by impact. (That sounds so painfully cliché of me, but it's precisely what I mean.) Impact like: How can I make an even bigger one? How can I use this platform to make a difference? How can I connect people that need to be connected? How can I use my obnoxiously large head to benefit others…better?

For example, I've been tickled to get so many emails from folks sharing their newly updated product or service descriptions, thanks to the series of posts I wrote on that topic–remember the J.Peterman examples?

…And it's also a responsibility.

With that in mind, it's my intention to make my 2013 projects very impact-heavy, and very help-happy. Almost to the point of hippie-esque, except not at all, because billowy skirts make my ass look huge.

Because it's about so much more than the numbers.

And only within the past ten years have I had the financial breathing room to be able to really see that.
Growing up, the numbers told the only story I knew.

How old I was when I started riding my bike to buy the groceries and stop at the bank to deposit our monthly checks–$592 from a mortgage my mom held, and $200 in child support from a guy I never met. Brian Morris. Philadelphia police officer. Know him?

The year the trailer we lived in was made.

Percentage of people from my county in Pennsylvania who went to college.

The number of cars we had.

The number of bets anyone would have made that someone with my background would become a millionaire before age 30. (Okay, so I'm not a millionaire just yet. But I'm also not 30 just yet. HANG TIGHT.)

But guess fucking what?

And when the odds aren't in your favor?

Remember that you can, too.

That's just one more reason why I don't like numbers.

Because while they might be great at analyzing the current data…

…turns out they're shit for predicting the future.

So, People Suck at Talking to Each Other

Marketing Is Fucking Weird, Isn’t It?

An Ode to the Internet’s Worst Business Advice

Don’t Cower. Don’t Make Yourself Small. Be Your Absolute Fucking Self Every Single Day.

The Internet Has Boundary Issues, and People Are Assholes. So What?

WE ARE WASTING OUR BRAINS ON BULLSHIT (And Other Darling Sentiments)

Your Decisions About Yourself Have Already Decided What Happens Next

On NOT “Following Your Dreams”

Quit Your Job. End the Relationship. Get on a Plane. Do Something "Crazy." Follow Your Gut. Take No Shit. Believe in Your Ideas. Go, Go, Go.

Your email is safe and you can unsubscribe anytime