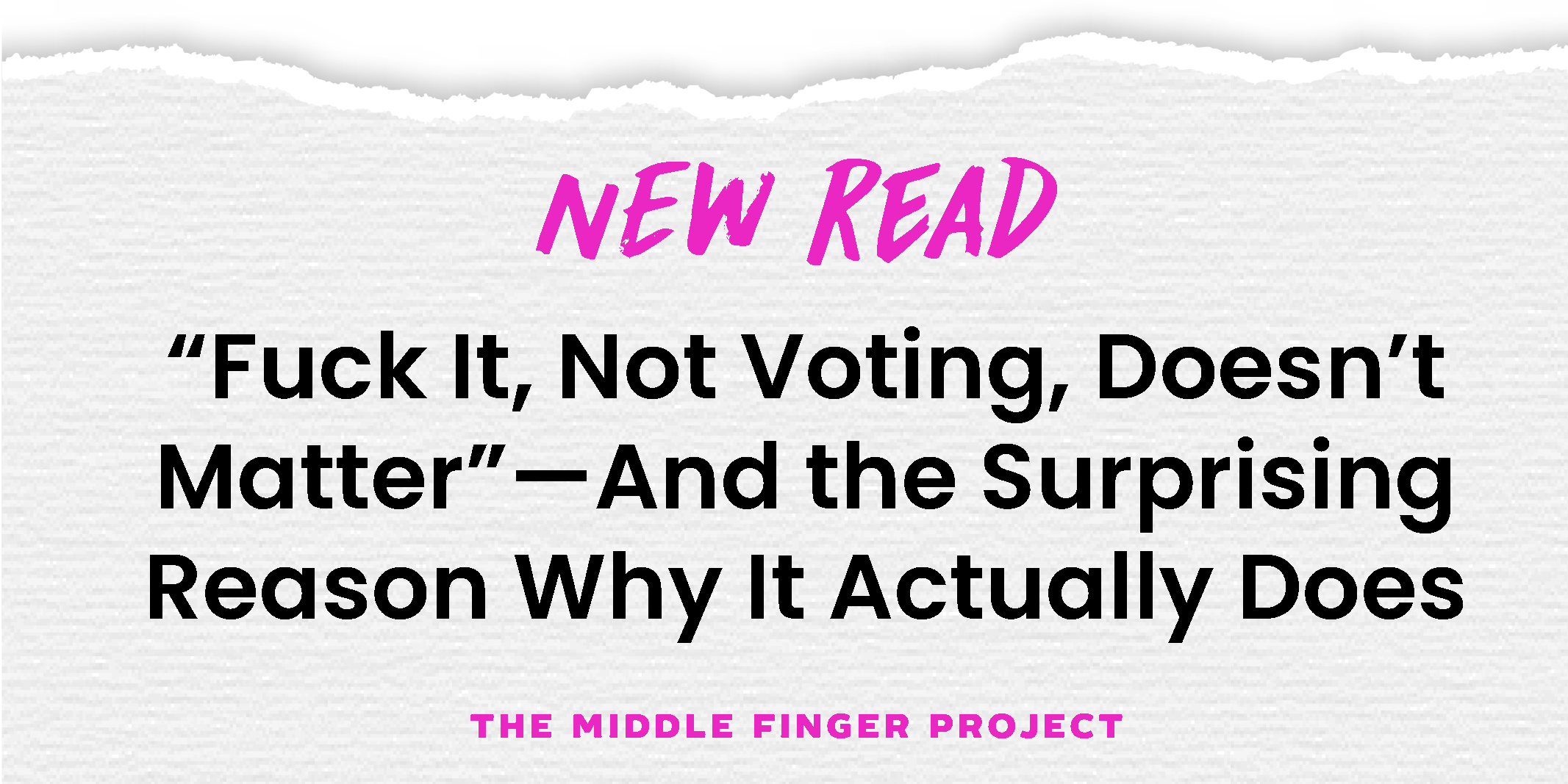 It’s fahking freezing here in Philly today—forty-five degrees, which we all know is basically thirty-two degrees, because there’s no rounding up when it comes to the weather. You ever notice that? NO ROUNDING UP IN THE WEATHER. Forty-five is not close to sixty, it’s close to death.

But I’m not here to talk about the weather. That would be the cheapest thing one could write about before Election Day…ever. But I was thinking about the weather, because I was thinking about the concept of tipping points. Water doesn’t turn to ice until it reaches that critical tipping point—thirty-two degrees—that suddenly changes everything. But up until that point, no change happens from forty-five degrees, to forty-four degrees, to forty-three degrees, to forty-two degrees, and so on. Water just stays like, well, water. And in fact, if you were forty-two degrees, you might start to feel a little bit like a failure, right? WHY ISN’T IT HAPPENING? WHY CAN’T I FREEZE THIS WATER??? I SUCK!!!!

And yet, forty-two degrees still has the most critical role of all. Water can’t become ice without it…even though you can’t see any change at forty-two degrees. But forty-two is still a must-happen, no-fucking-joke part of the process: you can’t get to thirty-two without first going through forty-two first. It’s a fundamental part of turning water to a solid. Ice won’t be made without it…even though forty-two can’t see its own effect. (Talk about no job satisfaction!)

The same applies to voting, folks. You might not be able to see the effect that your one little vote has, but we can’t get to the tipping point without your participation. It’s physically impossible. You are forty-two. And your vote is an essential part of the chain reaction that occurs to move us from one place to another.

Nothing about your vote is little. It’s a life-and-death part of a delicate system that depends on the proper ingredients to function correctly. You know, like trying to bake a cake without flour? One cup less, and it throws everything off.

And one vote less, and our entire democracy is thrown off, just the same.

So if you are feeling exhausted / over it / what’s the use-ish? If you aren’t planning on going to vote tomorrow because you hate both candidates? If you’re thinking it won’t matter anyway? If you’re convinced you’re wasting your time working within a rigged system?

Apathy is the realest enemy of all.

Go to iwillvote.com, enter your address, and find your local polling place—mine is literally just around the block, at a cute little church. They’re often at places like churches, so you don’t have to be intimidated. It’s way easier than you think: you walk in, fill out a card, and walk out. That’s all it takes. And every neighborhood and county has their own, so you’ll be with people in your local area…not hoards of people from all over the place.

Be forty-two in order to vote in forty-six.

I’m personally counting on you.

Whatever you want to do, you can accomplish it with good, old-fashioned cause and effect. We like to glorify it with romantic notions of “I WAS MEANT FOR THISSSS!” but the reality is far less glamorous. Nobody likes hearing that, because it makes us feel less extraordinary. It invalidates our significance. Simply sitting your crotch in a chair and doing the work every single day implies that maybe we aren’t so remarkable at all— that maybe time is the real hero.

But the odds aren’t about luck: it’s about nerve. The nerve to keep going, even when “reasonable” would suggest otherwise. There’s a life hack for you: don’t stop, even when your hands are bleeding.

Get the weekly emails that help you find your voice, screw the naysayers, and follow your passion (unless you’re a serial killer).

It’s fahking freezing here in Philly today—forty-five degrees, which we all know is basically thirty-two degrees, because there’s no rounding up when it comes to the weather. You ever notice that? NO ROUNDING UP IN THE WEATHER. Forty-five is not close to sixty, it’s close to death. But I’m not here to talk about the […]

Get the weekly emails that help you find your voice, screw the naysayers, and follow your passion (unless you’re a serial killer).