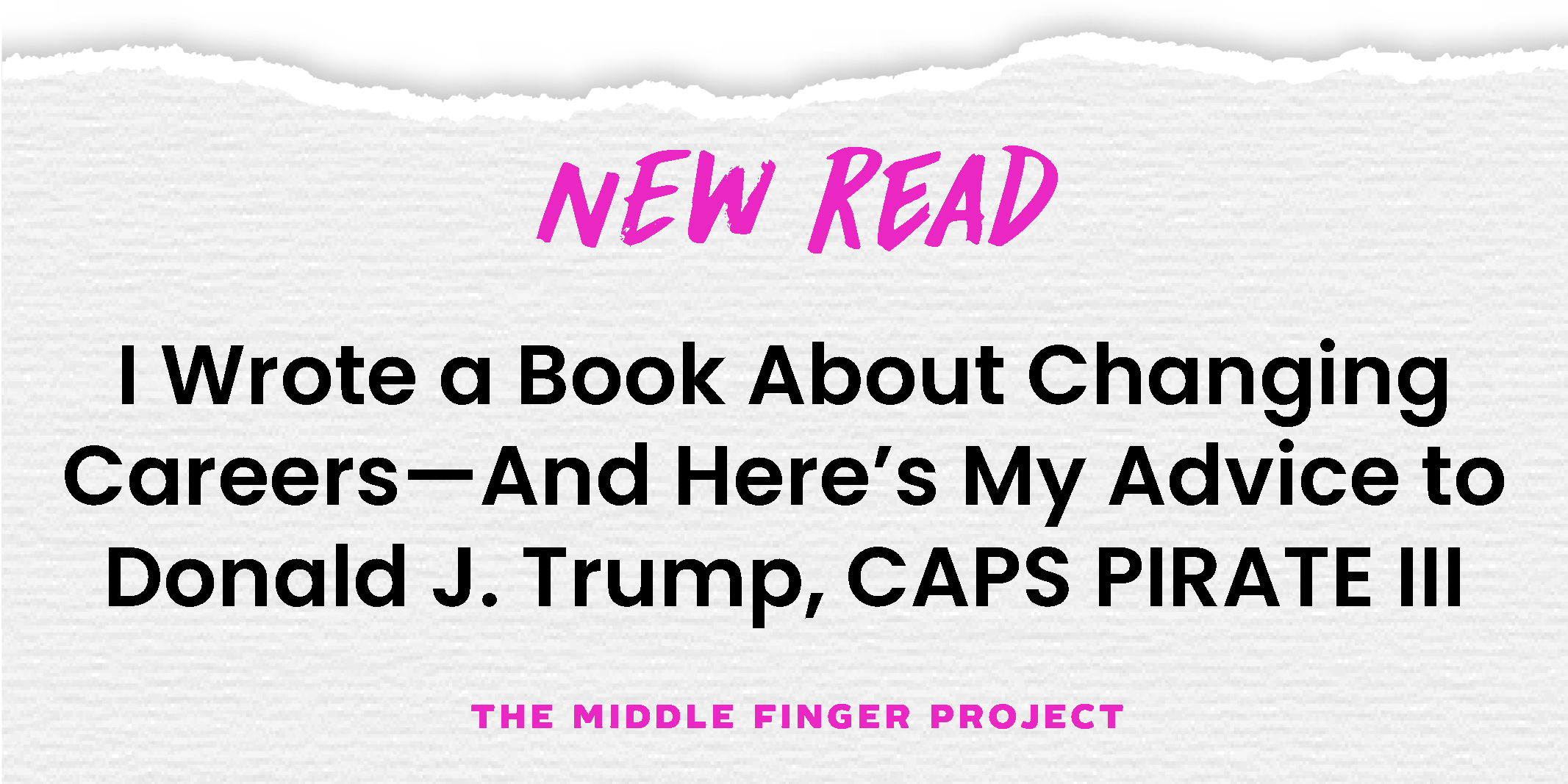 Walking around the house this morning looking like my best self—AKA with an oversized Columbia fleece and these really, really thin sweatpants from Target that kind of make my ass look like a bouncy miracle???—and that’s when it hit me:

Not just because of the book title—though “The Middle Finger Project” is rather convenient for the context—but because it seems like the man is in *desperate* need of some solid career-transition guidance. Then again, the book is all about following your passions unless you’re a serial killer, and Donald's, like, one step away.* HOWEVER, for a guy who's about to have the biggest career crisis on the planet? Who has no idea what he'll do next? Who could really use some words of encouragement? I have JUST the thing.

Here are some hand-selected quotes I pulled special from The Middle Finger Project book for the man who has single-handedly ruined my ALL CAPS game for life:

“Authority only works as long as you trust that someone smarter than you is making the rules.”

This is where your presidency hit the skids, Don. Not trying to rub salt in the ol' wound, but we all know that you can't change it until you name it—so here's me yelling with a megaphone that half of America doesn't buy that you are, in fact, smarter than them. (“Yosemite” didn't help.)

“We all go to work every day and feel good about the fact that we have gone. But, what have we done?”

Unfortunately, Homeland Security is still trying to figure out the answer to this question.

“While your status may be admirable, you don’t admire yourself. This is not okay. This is a very real emergency.”

Okay, fine, you admire yourself BIGLY. You've said many times how lucky we are to have you as president. But I think all that pomp and puffery is massive overcompensation for the fact that you actually feel like a giant fraud. (Oops, there's the F-word again!) Truth is, I think you know you're a terrible president. And I think your glaring incompetence gnaws at you. And I think you very much dislike the role because you feel like an imposter every single day of your life. So my advice to you is another humble quote from my own damn book:

“Of course you feel like an imposter: when you’re doing work that doesn’t belong in your life, it feels wrong.”

I don't know if you can feel things, Donald, but feel free to borrow some of the sentiment of the rest of the whole entire world: this job isn't for you, honey. Move on.

“That’s when you know it’s bad: when you’re living a life not even Chip and Joanna Gaines can fix.”

Though I bet they could help you decorate the White House for the holidays since Melania doesn't want to do it.

“Is it any wonder so many of us are left feeling like a bunch of mediocre, midwestern white men who peaked during high school football? The focus has always been on productivity, not creativity.”

I'm sure this quote really hits home so I'm just going to leave this right there.

“Now—she says calmly—there is a lot of fun-filled advice out there for when your life suddenly hits the skids and comes to a screeching halt . . . by which I mean screeching into an empty Four Seasons Total Landscaping parking lot, Rudy Giuliani's personal venue of choice.

For example, Deepak Chopra would probably advise: “You must find the place inside yourself where nothing is impossible.” (I think he means “in your dreams.” You have seen some REALLy pornographic things over the years.)

Dr. Phil, on the other hand, might say: “If you need a miracle, be a miracle.” (And then we would all look at him like, DON'T ENCOURAGE HIM, PHIL.)

Nayyirah Waheed, one of my favorite poets, would cryptically whisper in a wonderful fashion: “I don’t pay attention to the world ending. It has ended for me many times, and began again in the morning.” (On Twitter. At 12:01am. When your stream is an all-new slate.)

Amy Schumer would swim up with arm floaties and cheer: “I don’t even want to know someone who isn’t barely hanging on by a thread.” (Second thoughts on this, Amy? An addendum, perhaps?)

And most importantly, Yogurt, from Spaceballs, would call out in a far-off, raspy voice: “May the Schwartz be with youuuuuu . . .” (That guy always knows how to motivate me.)

Yes, plenty of well-meaning advice, but not a whole lot of “BREAK GLASS IN CASE OF EMERGENCY” kind of counsel—which is precisely what one needs in a situation like that. What do you do when you’ve hit the rockiest of rock bottoms? Where do you go when it all goes wrong?”

“I was determined to become the most middle class of ALL the middle class! I would have carpeted staircases and organic sunscreen and be the kind of person who layered wax paper in between their slices of leftover pizza. (There are people who do this, they should be president.)”

Hear that? They should be president. It's printed right there.

“Most people will say anything to justify their own actions, because most people would rather be right than happy.”

In your case, I think the sentence really should read, “Most Republicans will say anything to justify their own actions, because most Republicans would rather be unprincipled shitbricks than admit defeat.”

“Money can’t cure the deep dissatisfaction of a person who is exasperated by his own life.”

Then again, I bet you could really use some right now—what, with all that debt.

Just imagine the hookers! It'll be so nice getting back to normal.

“Commitment is a virtue until it becomes a blankie.”

And we all know tough men like you do not sleep with blankies! Conceding the presidency will not make you look weak; in fact, it will prove the opposite: that you don't need ANYONE! Yoouuuu areeee Donaldddd Trumppppp! (*taps mic* Is it working? Is he buying it?)

“Quit often. Quit over and over again. Become an expert quitter, because this means that you are also an expert starter.”

Look at that sweet little reframe, Donald. That's what you needed, isn't it? A nice little reframe. There we go, sweetheart. Ashley's got you. Who needs the presidency when you can be the leader of the Flat Earthers? SILVER LINING, DON. SILVER LINING.

Life circumstances are not life sentences. If a Scranton girl who grew up in a trailer park can make it, so can you.

I guess Scranton's probably a sore subject right now, but I promise trailers aren't that bad—little roomier than a jail cell, you know???? I mean, speaking of life sentences, darling…
Share on Facebook Tweet It Share on Linked In