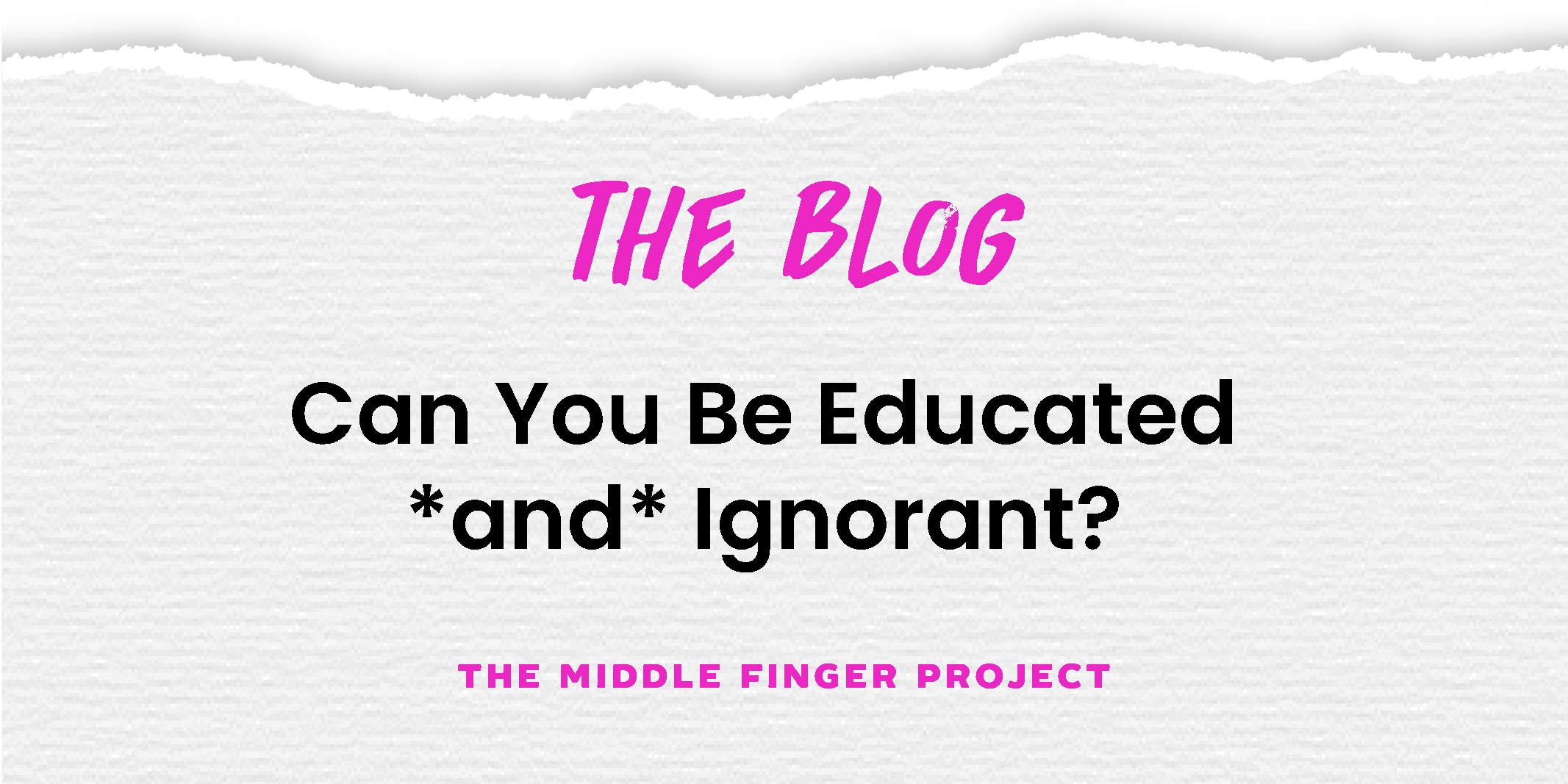 Sounds like a simple question. You think of education and you automatically think of a four-year college degree from someplace with a statue of a man on top of a 200-year-old building, shielding his eyes from the sun as if we are on the horizon of something really remarkable, here. (Namely a contentious game of flip cup, where anyone can go home a wiinnnneeeer!)

When we think of education, we think of school—because that’s where education is supposed to happen. The more schooling you’ve done, and the more prestigious the school, the more educated you’re supposed to be.

What a load of horse spit.

Which causes some confusion when it comes to who the hell is running the country—not to mention our stock market, our banks, our government, and our businesses. We assume that the people there in charge ACTUALLY know what they’re doing; that they’re qualified to be in such positions of power.

But qualifications do not always mean qualified; sometimes they simply mean that you jumped through more hoops than the next guy.

However, jumping through hoops alone does not make you better—it often just makes you a willing participant in a circus.

I say this in response to the conversation I’ve seen happening where some Tommy Tough Nuts went to a big state university and had some level of mediocre white-man success and then is all, “I’ve put in the hard work! I don’t want to pay for your failure via my taxes!”

This guy, first of all. But second: how easily hard work can be confused with hoops. Hoops that, by the way, only reveal themselves to a small percentage of the population in the first place, based on their socioeconomic status, the color of their skin, the environment in which they grew up in, and the connections that they have.

Make no mistake: the world is not an equal opportunity employer. The only people saying that are white, privileged people who have had the benefit of not needing one.

So what does it mean to have an education—not merely to “be educated?”

Welp, pretty sure we can rule out:

They can be helpful, but they can also just be optics. This explains why “educated voters” oftentimes vote in uneducated ways.

Rather, real education comes not from what you have in this world, but your vast experience within the world.

And perspective is your ability to see things relative to one another. Nothing is one-dimensional and depthless, nor is it absolute or automatic. “I am right! My way or no way!” Rather, it’s the ability to take everything into account and see things globally, as they connect to one another, taking intangibles like context and subtext into consideration.

Even when you disagree at first blush.

The educated who lack real education will always insist they are right, because their “hard work” cannot have been performed in vain.

But the person who carries true education in their mind? Will be capable of seeing many truths, not just their own—regardless of how much intelligence they’ve been awarded by a piece of paper.

The diploma.
The money.
The deed.

All mere pieces of paper that amount to nothing, if you cannot access the education you paid for.

Real education is not about assuming you are right because you have earned the right to be it; it’s assuming you may not be right, and then operating from a place of curiosity to discover just how many “right ideas” exist.

Real education tells you that there is not one truth, but many.

Real education tells you that your jumping through hoops does not mean someone else’s failure.

It simply means you jumped through a lot of hoops.

I’m Ash & I’ve been writing this column since 2009 to tens of thousands of people around the globe all about giving the finger to societal expectations (and probably your conservative Aunt Sarah). If you’re feeling stuck, enter your email and I’ll send you my newest, direct to your inbox. No zombies, promise.