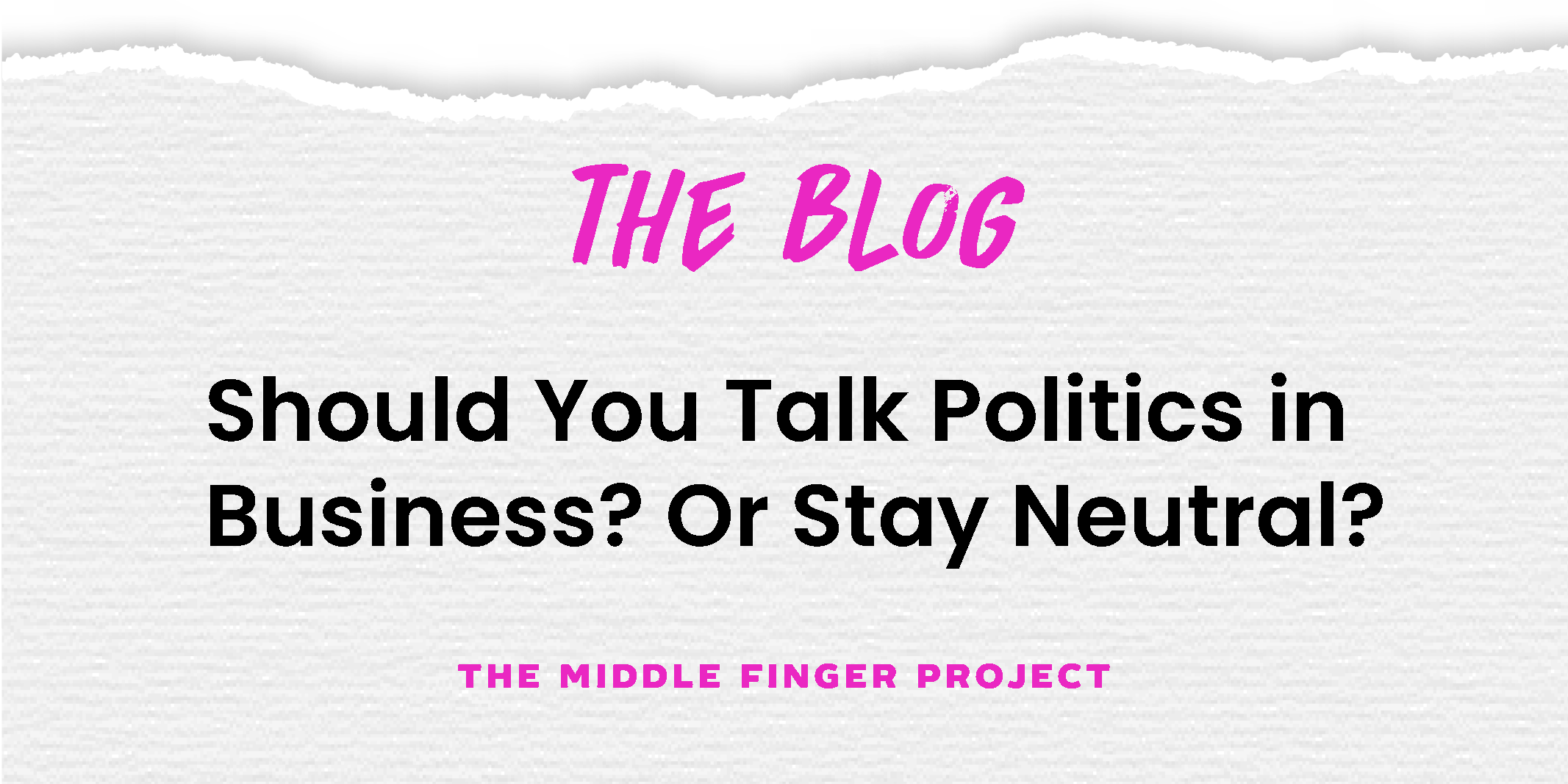 THIS WEEK, am I right?

I literally didn’t sleep on Tuesday. Then I finally get to sleep, and wake up to this morning. How can you be talking about anything else right now?

Is that jarring to you? It’s a bit jarring to me—like someone running in the room and shouting, “There’s an active shooter outside and he’s coming for us all!” and you just staring straight ahead like a Stepford Wife, smiling for the camera as you give a webinar about branding.

This begs a bigger question.

Should ya stay exclusively in your lane, stay focused on your message, and just continue to lead there? (Niching! Not offending anyone! Pumpkin spice 100 ways!) Or is leadership a quality that, by its very nature, transcends beyond that and permeates everything you do…because it must, if it is true?

In other words: can you escape the obligation of leadership if you’re really a leader?

To answer the mountain of existential questions I’ve just posed, I’d like to outline why many brands historically don’t talk politics or social issues or get involved and stay neutral.

Why most brands don't talk politics:

And maybe just a general unwillingness to engage.

Then there’s the flip side.

All the reasons why none of those reasons matter:

There is one point here, however, that I can appreciate: and that's not knowing exactly what to say or how to say it.

Hell, most people aren’t sure how to ask for a latte at Starbucks, let alone something of this importance and magnitude. The pressure to do it “right” is enough to send even the most well-intentioned back to any Boo-Berry Pinterest board.

But here’s where I’m going to press.

People like you and I are different, here on the internet. We are creative and curious and community-minded and connected. We are forward-thinking and progressive by default through the very medium in which we thrive. We are leaders, or we wouldn’t be here in the first place. We are path-makers. We are the ones pushing forward in ways that other people haven’t even yet considered. We are the experimenters, the adventurers, the do-ers, the change-makers. We are in a unique position to lead, more than anyone else in the common population. Others may have their friends from high school as an audience on Facebook, but you and I have the world. No matter how small your platform is, you have one. You have a voice. You have in-roads. You have attention. You have access. And it’s our job to honor that—not just during the hours of 9-5 or when it suits one’s bottom line. But always, and in ways that matter to you, even if you aren’t sure it’s right—because at the very least, you will always be true. Independent of the industry you’re in, that's what the job IS. That’s what being a citizen of the internet is: being an engaged motherfucker who's true. That is what being a member of this online community means. Perhaps you were worried before about offending someone—before it was whether or not you could say the word “shit,” or take a hard stance on whether or not copywriting should be clear or clever. But now, it’s a guarantee. No matter what you do next, it will inevitably be offensive to someone.

So who will you choose to offend?

Reality must not be ignored, but wielded with deliberate intention and a clear heart.

And most of all, it needs your leadership. The all-inclusive kind. The messy, real kind that shows up and keeps showing up, no matter what the circumstances are or how nervous you feel about it. Because that’s the only kind there is.

To not stand up, despite the complexities of doing so, does not make for a more fair, just or neutral leader in the end.

It merely makes for a mouse at a masquerade party.

And later, once the costume’s removed, it merely only makes for a mouse.

I’m Ash & I’ve been writing this column since 2009 to tens of thousands of people around the globe all about giving the finger to societal expectations (and probably your conservative Aunt Sarah). If you’re feeling stuck, enter your email and I’ll send you my newest, direct to your inbox. No zombies, promise.

Just The Tip: The Final Formula For Writing An Effective Apology

You’re going to fuck up. Or at the very least, at some time in your life, someone’s going to think you did. And while each apology is going to require its very own dollop of attention, these three steps will get you started in the right direction, (which everyone knows is due North). 1. Keep […]

23 Phrases Every Stressed Out, Strung Out, Well-Meaning (Yet Irritable) Business Owner Needs to Memorize TODAY.

Being able to elegantly SAY WHAT YOU MEAN isn’t always an easy task— —particularly when you’re too busy for petty sh*t like showers, your stress hormones are being IV dripped into your veins at the rate of a class five river rapid, your head is doing Beetlejuice-style 360s as you juggle fourteen and a half clients (and their really cute idiosyncrasies—wink), […]

Stop Peeing Apologies Down Your Leg: Instead of Saying “I’m Sorry,” Say “THANK YOU”

I used to be a really nice person. I was the kind of person who would nod sweetly and enthusiastically, as if I had a permanent coating of cotton candy on my lips—even when I was seething inside. (Whether this made me nice or a moron is still up for debate.) I would never question […]

Psycho is a good word, isn’t it? Ditto psychobitch, which I really gotta use more. (WE ALL KNOW SOMEBODY…) But when cold-emailing a potential client whose money you would love to have—ahem—we don’t want you to be that person. Not only will you be deleted faster than Barr. David Newton Esq. of Nigeria, you’ll be […]

A Note on Writing, Politics & What the Hell We’re Doing Now

Hey. I really wanted to send you a personal note (wait, who am I kidding, they’re all my personal notes) to say thank you. Thanks for reading. Thanks for being here. Thanks for sticking with me through a launch like we just completed. (I know sometimes my emails are…a lot. You should see how excitable […]

Networking Event? Try This Creative Approach to Introducing Yourself.

Are these people on crack? It was the first thought that came to mind as I read this Inc. article that advises you to take your glass of warm Yellowtail, roll up to a stranger at a networking event and all but murmur in their ear: How can I help you? The theory is that you’ll […]

Taking Time Off for the Holidays but HAVEN’T TOLD YOUR CLIENTS? Here’s a Proven Script You Can Use (That Won’t Put Anyone’s Undies in a Bunch)

Last week I gave you a savage script for what to say when you want to raise your rates come the New Year—without seeming like a total grabby, greedy, ungrateful weirdo. But guess what? This fun train’s just begun, because this week, YOU GET ANUTHAAA ONEEEE. It’s the middle of December, my friend, and that […]

Boo-Yah, Time to Raise Your Rates! Here’s a Proven Script You Can Use (That Won’t Even Make It a Little Bit Awkward)

Haiiiiiiiiii! It’s December, and you know what that means! TIME TO RAISE YOUR RATES. You need to send the following email to your clients RIGHT NOW. (Like, right now. Especially because today is Friday, and this email is always served best on a Friday with a beer.) Now then. *clears throat* This miraculous email that […]

“Let’s hop on a call” strikes VAMPIRE-LIKE-TERROR into the heart of new business owners and experienced ones alike. When I took a survey asking why, here were some of the answers: Just puhleezze buy it…don’t make me ask!! The first 10 seconds are so awkward! I hate small talk but never know how to start […]