Can’t Believe I Said This to JENNY F*CKING MCCARTHY

What if I shit myself?

This was exactly what I was thinking, yesterday, as I was getting ready to TALK TO A CELEBRITY FOR THE FIRST TIME IN MY LIFE. Not because I was nervous, but because I was up the entire night with the ~worst~ waves of stomach cramps—something I blame entirely on the Acai Berry Bowl I ate in Santa Teresa, Costa Rica, the day before. (I mean, it clearly wasn't the pizza. My body knows what to do with THAT.)

Fortunately, I did not experience an unfortunate bowel movement whilst on the phone with a celebrity. But you should've seen me sweating! They gave me this mysterious phone number to call into at 11:19am ET on the dot, and I was scheduled to go LIVE with Jenny McCarthy on her SiriusXM show ONE MINUTE LATER at 11:20 ET—so, like, no margin for error, right? So the clock turns 11:18 and I'm all: Should I call now?! Should I call early?! No, don't call early! They said 11:19 for a reason! So I stare down this clock like I'm about to arm wrestle it, beads of sweat forming on my upper lip, and for a brief moment I am convinced that time has actually stopped. Never has a minute taken longer to pass! And then I shift my weight from the right, to the left, and curse the fact that I am in Costa Rica right now, which means that all air conditioning must be off, as do the fans, because the mic pics up the background noise. (But apparently not my huffing and puffing from the humidity.) And then, suddenly, THERE IT WAS. Eleven nineteen on the dot! Go, go, go, call, call, call! So I press the button.

NO! WHAT?! What do you mean the number I have dialed doesn't exist?!

I had done test calls to the United States! I had done three of them! Just that morning! How could it be?!

The clock turns to 11:20 and I'm not on yet. My worst nightmare has officially happened: I am going to make an ass out of myself in front of Jenny McCarthy.

I held my breath as I tried one last time. And then, suddenly, there was a voice! Not the woman from Movistar, but a different voice! One that sounded like an introduction to The Jenny McCarthy show! “I'm not sure if I want to be her, or want to be in her,” the voice cooed. “Joining me on the show—very excited to talk to her—this book sounds awesome. Ready guys? The Middle Finger Project: Trash Your Imposter Syndrome and Live the Unf*ckwithable Life You Deserve…”

Oh my god, it's Jenny McCarthy introducing ME. Me!!!! She's talking about ME!

So she introduces me, right? And then she says, “Hi, Ash Ambirge, welcome to my show!” And you know what I say next? DO YOU KNOW WHAT I SAY?

“Jenny FUCKING McCarthy—what is UP?!”

And then she laughs, right?! Like, wholeheartedly! A real laugh! She's laughing! And that's when I say it. I can't even contain myself from saying it. I then say the most in-eloquent thing a person could say for the first time talking to a celebrity.

“You need to know I've been shitting my pants all morning because of you.”

YUP. That was the first line out of ~my~ mouth. And then Jenny actually responds with the following (click to listen!):

But it was just the best. Jenny was awesome. She even told me that she wanted to have me on the show again, sometime, so we could talk about “some real shit.” I had friends texting me photos of their car radio, where my name suddenly appeared on their dash. And then I realized I was on the same episode as Daymond Freaking John from Shark Tank. And it all felt VERY Cinderella at the ball.🙂 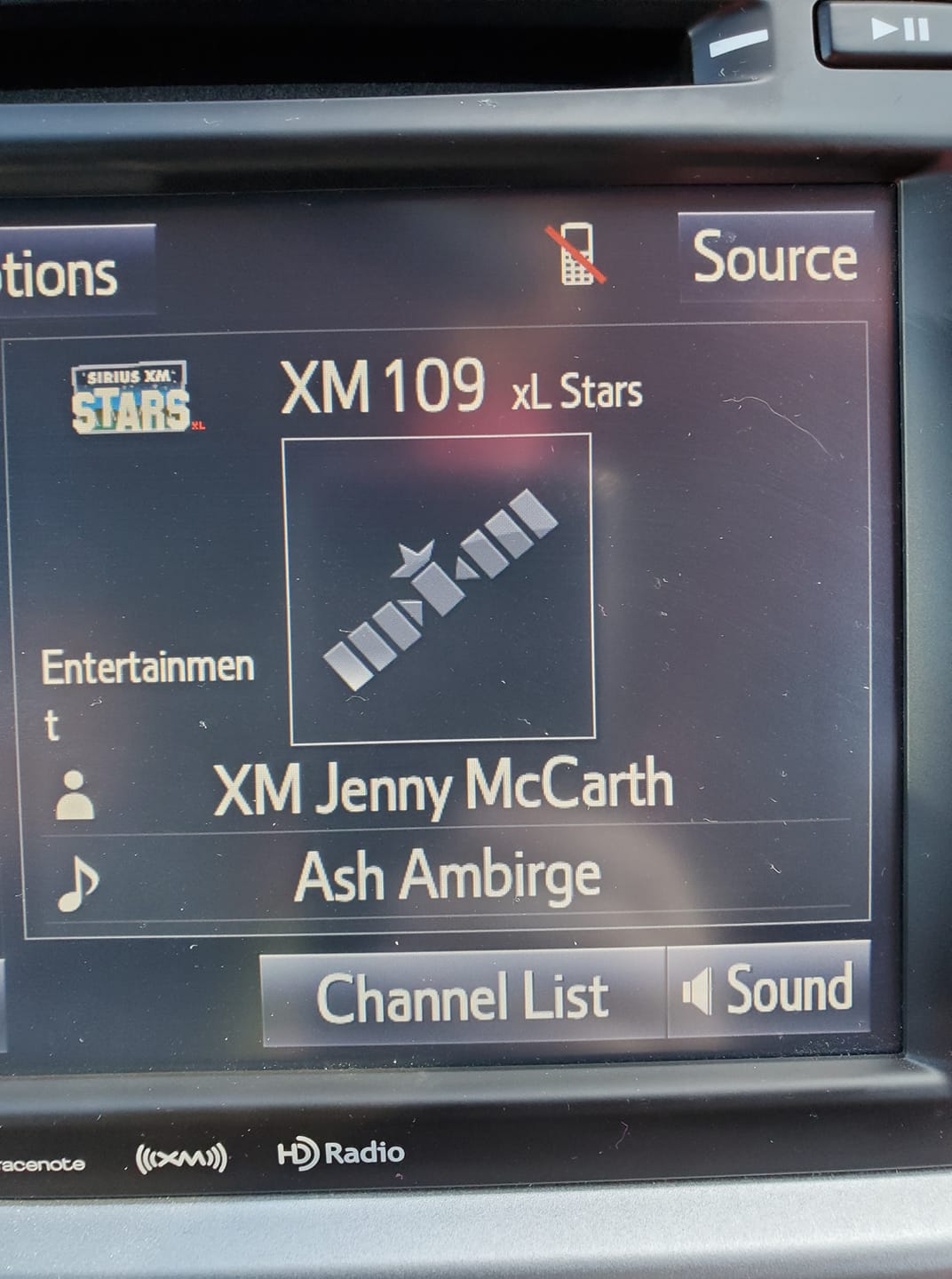 So how do you get on something like The Jenny McCarthy Show? Well, I'll let you in on a little secret: ANYONE can be on The Jenny McCarthy Show. I mean, not just her show: any show. And not because they have low standards, but because when you do it right? You become a juicy hunk of meat. You become prime rib, baby! They ~want~ to talk to you. But, you've got to know how to pitch yourself so you look like the juicy hunk of meat that you are—and not some picked-at leftovers.

This is where so many people S-T-R-U-G-G-L-E. (Uggle, uggle, uggle.) Not in doing good work, because you ARE doing good work. But in figuring out how to package your work with a wow-factor.

It's also how I was able to get on:

Plus, of course, conversations with The Today Show and big-ass magazines and media publications (more forthcoming!), all of which happened because (a) We found my “Forty-Five”; (b) Used it to package my work into wow-factor; (c) Pitched it to the right people.

Do you GET how important this is? All of this is FREE ADVERTISING. Because shows and media and TV and magazines all need content—that's how they attract eyeballs and that's how they make money with their advertisers. All you need to do? Is figure out how to make yourself into a finger-lickin' good snack.

It's part art, part science, and we're going to be talking a ton more about that this month as I begin to set out on my own to get my own publicity without the help of Penguin, now that I'm a baby bird who has left the nest 🐣. And I'm going to be doing so with the help of my friend Selena Soo, well-known publicity expert and all-around media badass. So I'm going to take you along for the ride and share what I'm doing and how you can do the same!

It's allllll about focusing on what moves the needle—and being disciplined enough to ignore the rest. Publicity is one of those things that acts as a huge lever so you get 100x the results for a fraction of the work. Cue: the fact that I was on a show with Jenny McCarthy. I could work and work and work and work trying to get my book out there, talking to individuals and doing things that are small potatoes and have little to no effect. OR I can learn how to hack the system and get in front of millions of people all at once. It's a no-brainer. (Plus, who wouldn't want their name in places like Cosmo? Come on, admit it: IT'S PRETTY COOL.)

Sooooooo, I just went through Selena's new Publicity Checklist (you can download yours here) and under Step Six: Story Ideas, she talks about writing a treasure trove of story ideas containing all different angles to pull from, depending on who you're pitching. So I did my homework, ma, and here are some of MINE (click to view): 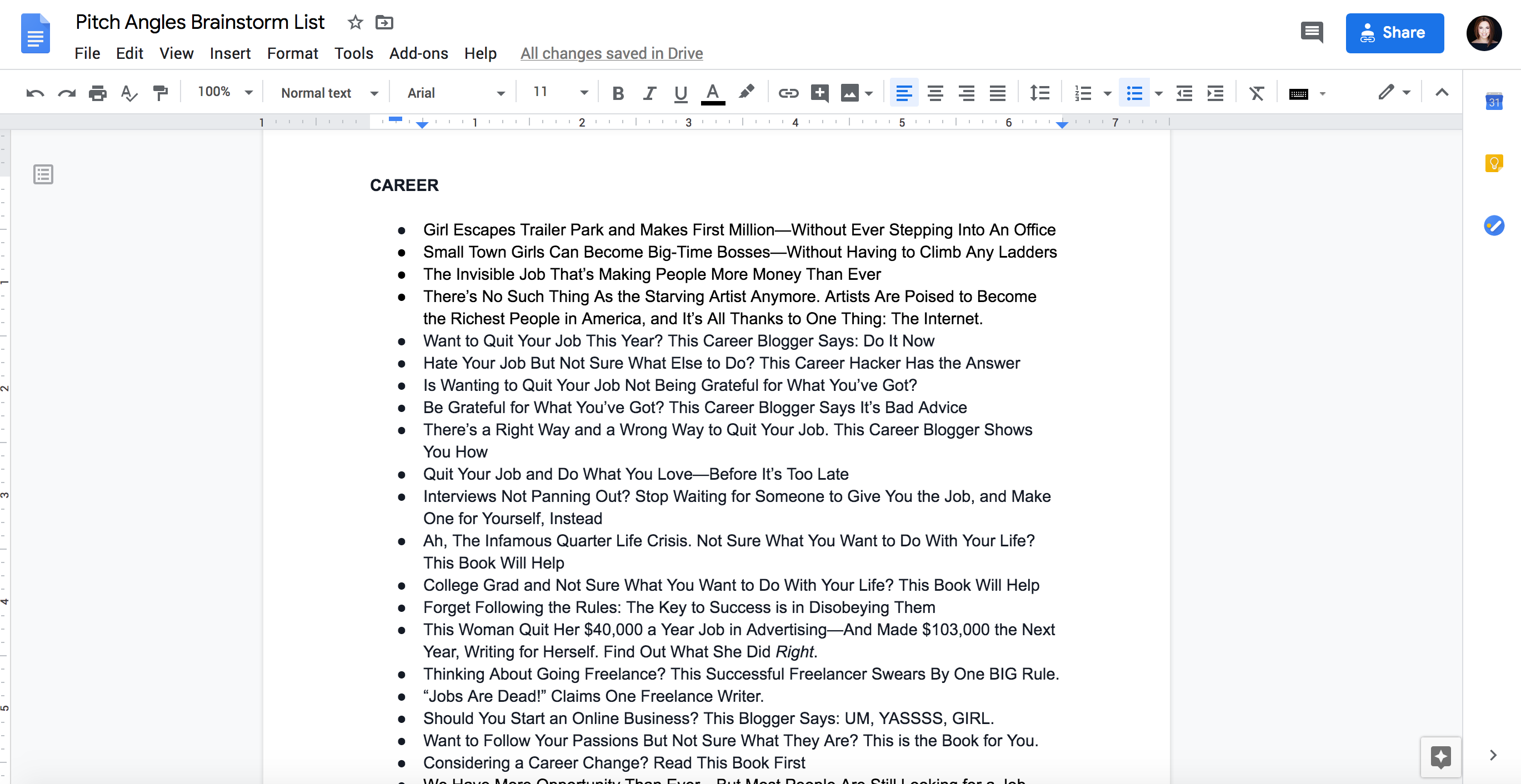 And because I'm kind of obsessed with publicity now (and never want to stop getting my ass featured in big-name places), I'm also joining a free 28-day pop-up Facebook group that Selena is running for anyone interested in learning some hidden-gem insider tips, tricks and secrets to getting big publicity. Wanna do it together? Come hang out with me in there so I don't feel like such a boob. You can request to join for free right here and Selena will let you in. (It starts Thursday, but request now, and I'll see you in there!)

Oh, what FUN we shall have.

Pretty pumped to get my study on—it's like grad school, but instead of spending hundreds of thousands of dollars, you rake in that dough, instead. Good deal to me!

Adore you. Hope you're having a great Tuesday. 🤗

The Competition Doesn’t Have Sh*t On You

Your Decisions About Yourself Have Already Decided What Happens Next

On Giving Refunds with Kindness (But Taking No Shit)

Four Things Never To Do When Asked, “What’s Your Rate?”

Your Logo On a BIC Pen Isn’t Going to Do Jack. (And Other Marketing Tactics You Can Stop Wasting Your Time With.)

WE ARE WASTING OUR BRAINS ON BULLSHIT (And Other Darling Sentiments)

The Tired Excuse That Women Need to Stop Making (Have You Ever Used It?)

If You’re Wrinkly, It Better Have Been Worth It.