I don’t have a good title for this shit, but it’ll help you get clients. Rah. Rah.

Allow me to introduce you to Jose.

Jose is my friend and Costa Rican empanada man who wakes up at 5am each morning, and then proceeds to make homemade empanadas with his wife, before loading them into coolers, and then spending the day from dusk 'til dawn hiking the beach and neighboring towns, selling his beef, chicken and cheese heaven (complete with homemade spicy sauce that will trump Frank's, and you KNOW I don't ever, ever diss Frank's).

I met Jose when I lived there in 2004. We became friends. We did not make out. Shut up.

When I got a contract to write an eBook on visiting Costa Rica in 2007, I mentioned Jose in the eBook. Now he tells me that people from all over the world see him on the beach and shout out his name, and say that they saw him in the guidebook. Amazing.

The point of this incredibly touching Hallmark story is that if you join us, you WILL be meeting Jose, too, so you should probably get excited. Empanadas on me, baby! 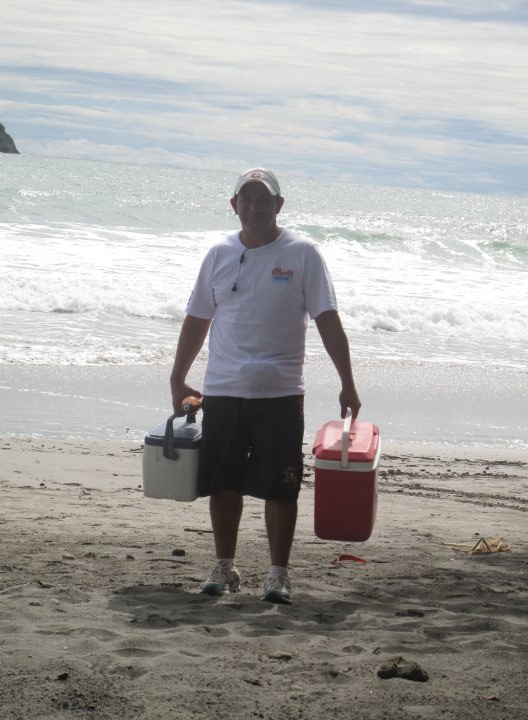 Next on the agenda: Clients + Cash: Never Hunt For Your Next Gig Again

I'll be re-launching my kick ass online program to the public for the first time since August, Monday, November 28th, at 12pm EST.

If you're a service provider and your biggest challenge is getting more clients, this is the course for you! (Insert hugely superficial male infomercial sales voice! Except don't really.)

The premise behind the program is that it teaches how to make clients come knock down your door–rather than you having to go knocking on theirs.

These are the same principles that have allowed me to currently be copywriting for Ashton Kutcher, Demi Moore, and Adrian Peterson of ze Minnesota Vikings. (I thought once our professional relationship was over we could totally date, but, of course, there's a wife and baby in the way. Freaking stable families getting in the way of my romances. Psh.)

Other clients have included movie producers, big ass Silicon Valley start-ups, the head astrologer at Cosmo, and many other high-profile clients. I was actually approached by that chick from the new Bravo TV show, The Headhuntress, since that seems relevant right now. (I think the pilot just aired this week.)

The point is that I didn't have to approach a single of one them. (Thank goodness. That would have been scary.) Every single one of them approached me, as do all of my clients. Because I've engineered it that way. And that's what the course is really all about–leveraging the internet in ways that allow you to get a steady stream of clients rollin' in the door…so you get a steady stream of cha-ching in your bank.

(Except it's not really a cha-ching sound, because that would imply that you make coins, when in reality, it'll be more like STACKS O' PAPER, making the sound much more like, “shwsh shwsh shwsh.”)

I have to admit, I regularly turn away new projects because I just don't have the bandwidth. (Braggity brag about your first world problems, Ash.) While I'm really not trying to brag (if I was trying to do that, I'd brag about how much fun I'm going to have on the beaches of Costa Rica in February), I AM trying to demonstrate that it's more than possible.

No, really. This is the end of the post.

Okay, for real. This is the end.

Wait, if I were Buddhist, could I still say, “god forsaken,” or would I totally have to give that one up?

Yet another first world problem to solve.

But fortunately I'm not Buddhist, so I'll try not to let it keep me awake at night.

Instead I'll be wondering whether or not Jose from Costa Rica would make me a special jumbo sized empanada for our welcome cocktail party.

He and I are buds.

Really. This is the end.

Please, Don’t Get Hard (Even When Life Is)

How to Be Interesting As Hell On Paper

You’re Not Drunk, But Your Vision Is Still Blurred – One Reason Why Religion, Marriage & Even Education Sucks

How to Be Taken Seriously in Biz + Life. (Does Not Apply to Douchebags, The President, or Anyone With The Name Barbie.)

It’s Never About What You’re Selling. And Always About What They’re Buying. There’s a Difference.

Are You Going To Be Someone Who Does? Or Doesn’t? (Warning: Contains Least Amount of Swear Words Ever Written On TMF)

Too Shy to Stand Up and Sing Your Own Praises? Start Here, You Humble Little Lovebug, You.