“She's so proud of your traveling. She wants you to live the life she was afraid to live, but always wanted. You were always her greatest work of art.”

Those were the words she said to me.

She was my mom's friend back in the moments of white Mustang convertibles, flirty bell bottoms, heart-filled hopes and dreams laced with determination.

At a time when my mother, a free-spirited artist and renaissance soul, first began to lose who she was.

At a time when her nervous excitement slowly began to transform into debilitating anxiety.

At a time when she was suddenly left broken-hearted and broke.

And at a time when she became a victim of her own self-doubt and self-consciousness, that slowly, but surely, gnawed away at any last bit of nerve she had.

She later had become sick with a physical ailment that needed treatment, but she was too anxious to fight.

Eventually, she stopped taking her medication.

The medication that was keeping her alive.

She couldn't take the pain anymore.

The physical pain, the mental pain.

She quietly tucked the pills she was given into her mattress, where she lie wishing for a revolver.

I know she wished for a gun because she told me so, through tears of agony and shooting pains in her legs.

They were the same tears I dismissed as being overly dramatic, as I pranced back to my dorm room an hour away, hopelessly naive and foolishly anxious to meet up with a group of fair weather friends–our last night of freedom before the final semester of our college career got started.

“Your mother is unresponsive,” said the unfamiliar voice of authority.

I arrived to our house an hour later, unsure of what I was going to find.

But by then, there was nothing left to find.

Just a hastily written yellow post-it on the door.

“Call me. Signed, The Coroner.”

You were always her greatest work of art._–

I wish I had known her when she drove her white Mustang convertible, golden blonde hair waving in the wind, signature neck scarf tied just right. I wish I had known the woman that winked at sailors, sipped on Brandy, breezily splashed paint on canvases, and entertained guests with salami sandwiches made with fresh cut Italian bread.

I didn't know that woman. But I do see playful glimpses of that woman everyday, in everything I do.

Did she know those would be some of the best moments of her life?

And furthermore, if these, right now, are some of the best moments of ours, would we know? Or would we just let them delicately slip through the cracks of time, forever chasing after tomorrow and the promise of nothing?

With our heart-filled hopes and dreams laced with determination…

Her moment was then.

…But our moment is right now.

Your moment is right now.

And whoever you're with.

Because as it turns out, you never know when the moment will arrive, when it won't be. 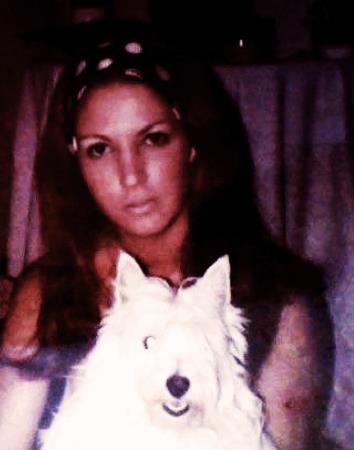 Yo, I’m Ash! Fifteen years ago I was a small town girl growing up in a trailer park in rural Pennsylvania when I lost both of my parents and became an orphan. Fourteen years ago, I left for Philadelphia on a mission to discover what it meant to live a good life and do work you’re proud of (something I never saw modeled). Twelve years ago I realized that the rules were made up by a guy named Ted who has a dog named Wedgie—and “normal” was the most disappointing thing that ever happened to me. Eleven years ago I quit my shiny middle-class job in advertising to strike it out as a freelance writer—and landed myself sleeping in my car in a Kmart parking lot. Ten years ago I finally cracked the code and made my first $103,000 as a creative writer on the internet using nothing more than my voice. Nine years ago I doubled my earnings. Eight years ago, I continued doubling my income—and then some. And now, today, I run The Middle Finger Project, an irreverent media co. that helps other women find their voice and teaches them to use it to build whatever the f*ck they want. With a book coming out with Penguin Random House this FEBRUARY 11TH, I’m proud to be a bad influence on women and help them do something disobediently brave with their life and their career. Enter yo’ email address and I’ll send you my weekly advice column sharing everything I’ve learned on pursuing your passions for a living—and making a shit ton of money doing it.

But no serial killers. Promise I won’t send those.

You don’t have to choose, you know. You can be intelligent…and sensual. Extroverted…and introverted. Complex…and simple. You…and someone who’s evolving into someone else. Sometimes, in an effort to finally define who the fuck we are, we start putting ourselves into the little boxes voluntarily—the same ones that we spent our earlier years trying to escape. […]

Slugs, Angel Hair Pasta & Vespas, Or, The One Thing That DOES Define You In This Life

So, I’m sitting in the bar at this restaurant. I’m lovingly twirling my fork into a steamy, lemony, buttery, most delightfully angelic heap of angel hair–the creamy, makes-you-throw-your-head-back-with-glee kind of pasta that, I was thinking, should probably be forbidden for nuns, because, I swear, this pasta is far more decadent than the best sex you […]

I Hate Mantras, And YET—I Love This One for When You’re Kinda Sorta Shitting Your Pants

I have a mantra (despite wanting to slit my throat upon hearing the word “mantra.”) Are you ready? My mantra is this: WHO CARES HOW YOU FEEL ABOUT IT? GO ANYWAY. Which sounds really kinda wrong, right? We’re a culture based on f-e-e-e-e-e-e-l-i-n-g-s. But sometimes, you have to override the ones that I call false […]

I Tattooed My Eyelids! Or: On Just Showing the Friggy Frig Up

A critical look at how the language you have available to you inevitably affects how you perceive the world. It’s deep–hold on to your hats.

Why Circles Are Better Than Lines

A discussion on how erasing the lines that divide us can be beneficial in more ways than we imagine–complete with 18 examples to get you started.

When Being in Control is a Disservice

I’ve got little patience for excuses. I proactively call myself out whenever I catch myself making excuses in order to either procrastinate or invent reasons why I shouldn’t put myself out there. Why? Because sometimes, putting yourself out there is nail-bitingly, blood-curdingly, will-drive-you-to-drink, flat-out terrifying at times. It’s far easier to continue doing what we’ve […]

So this past week, I took a motherfucking vacation. And do you know what? I’m going to take vacations all the time! It’s been decided! Vacations are just way too great to not take! Why aren’t people vacationing all the time? I hereby declare every last week of the month vacation week. Not only do […]

Why Moderation is for Losers.

Growing up, my dad’s favorite line used to be, “Everything in moderation.” What a riot. One would assume that, after having those particular words-o-wisdom jack-hammered into my brain at least once per week, that I would have turned out, well, moderate. I’d think moderately, I’d travel moderately, I’d love moderately, and I’d live moderately. And […]

YOU F*cking Press Two! Or, 26 Reasons Humans Are Doomed.

26 Reasons Humans Are Doomed: Pet Peeve Edition Those heathens who stand on the left side of the escalator. What are we, savages? What the fuck is airplane mode? Socially illiterate jack offs who don’t pick up on the verbal cue that I WANT TO GET OFF THE PHONE. Unauthorized double dippers. Forms that make […]

Rules–particularly the dogmatic variety–are most useful for those who aren’t confident enough to make their own damn decisions.   For the rest of us, there’s vodka–so we can cope with the decisions we were foolishly wise enough to make.   So help us, Grey Goose.   Amen. -Excerpt from my forthcoming book, The Middle Finger […]

Fuck Shit Balls I Didn’t Finish Those Edits, Yet. And Other Stuff That Doesn’t Matter. (In Memory of Enrique.)

So I’m not sure what you did yesterday, but I, for one, witnessed somebody drown. You’re probably thinking I’m joking, because who mentions something like drowning so nonchalantly? But I am not, unfortunately, joking. And while I’m calm now, yesterday I was anything but. It was sunset, and I was with my Costa Rican girlfriends […]

Join a girl from a trailer park who went on a mission to figure out what it means to live a good life and do work you’re proud of—and ended up as one of the world’s foremost career hackers, making a million dollars from the backseat of her car, writing on the Internet and traveling everywhere and causing lots of religious people pause.

Privacy Policy
NO, NOT ANOTHER ONEEEE! But hey, the law is the law, and as such, letting you know that The Middle Finger Project uses (oatmeal) cookies to improve your experience. We'll assume you're cool with this, but you can opt-out if you wish, Buttercup. Accept RejectRead More
Privacy & Cookies Policy