It's so adult, you might swear you've just been transported to a seedy, smoke-laced Las Vegas strip club filled with large Italian men.

The good news is that you haven't.

The bad news is that somebody let me have my own blog.

What I want to talk about is some weird shit.

Weird shit always makes its way into my day, so why not talk about it here?

You see this horrendously blurry picture of a bag? 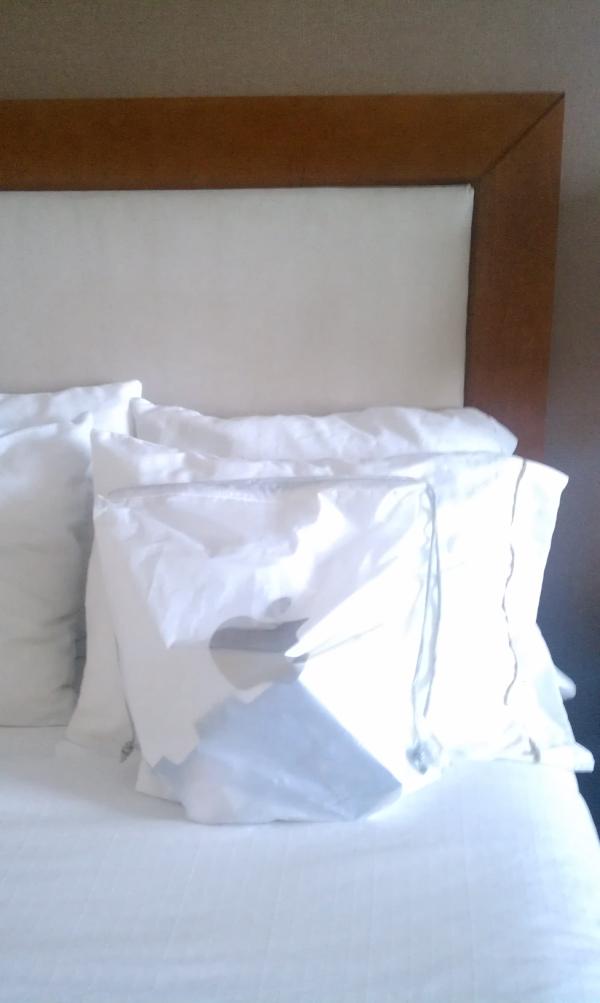 Yeah, well….I had to practically knife a bitch to get that bag.

See, I told you it was gonna get weird.

Me, knifing bitches? I can barely cut my grilled cheese in half.

The reason for all of this unnecessary gang-like, bandana-requiring violence is because I was at the Apple store the other day (weren't you?) and, lo and behold, I saw the strangest thing.

In fact, I saw an entire canoe's worth of unhappy people, waiting awkwardly around the store for the one idiot who had the stupid little maxi-pad, plus-sized uber-special iphonity phone phone that can, apparently, check people out of the store.

Shockingly, we did not have these in Chile.

So this was a thrilling new experience, since I happen to be in the United States right now. You know, the place I remember as being more efficient than South America.

So of course I thought to myself:

Where are all the fucking cash registers?!

And so I look real stupid, looking around the store like I just missed 'em somewhere. Like maybe I need to discreetly slide some book off of a bookshelf somewhere and suddenly the wall will pull an Indiana Jones move and rotate around, revealing the real Apple store with a whole glistening team of young, supple cash registers, just waiting to ring up my purchase.

We gave up cash registers?

Fucking iPhone's just so advanced these days, who needs clunky metal boxes full of money, anyway? Because apparently nobody pays with cash anymore.

BUT WHAT IF I WANTED TO PAY WITH CASH?

What if I just happened to have $1600 burning a painful hole in my pocket, and I wanted to give it to Apple, but they couldn't take my money.

I find that hard to believe.

What is the world coming to?

It's right then when some red-headed, sun-spot faced *BLEEP* tries to saddle on up to my man with the magical maxi pad cash register, just before it was my turn. I saw her tryin' to make her move. Like she had more important things to do than me. Doesn't she know I had to hurry home so I could write intellectually stimulating blog posts like this one?

So, that's when I almost stabbed her.

It was more of an imaginary stab, of course, but there was a solid mental intention on my part, and that's got to count for something.

A bowl full of jelly beans, perhaps. Except I hate jelly beans. So they can get the fuck out of my post.

This really had nothing to do with why I even took the picture of the bag in the first place, because in the first place I was totally intending on writing a post about the importance of packaging and how the higher quality bags that Apple uses translates really well into a perception of higher quality products and that it just wouldn't be the same if they were giving out Macbook Pros in a fucking grocery store bag or some shit AND AND AND as an added bonus I was going to make jokes about its cute little strings that turn the bag into a backpack–you know, just in case you happen to be one of those annoying hipster people who rides their bike everywhere with a beanie hat and cranberry and navy colored striped crew neck sweater.

Now I'm the one who's going to get stabbed.

So much for a good start to the new year.

I knew I shouldn't have given up karate.

P.S. My apologies to the sales guy at the Apple store who I called an idiot. You were not really an idiot. That was just for effect.

P.P.S. You asked me the name of my blog. I told you. God forbid you are reading this.

P.P.P.S. I like big butts and I cannot lie. Unrelated.

A Meditation on Shit Talkers

Having Trouble Committing Yourself to That Project You Really, Really Wanna Do, But Can’t Seem to Get Started?

Million Things To Do? Prioritize by ROI. (And Then Get a Life.)

10 Reasons Business Partners Can Be a Terrible, Horrible, No Good, Very Bad Idea.

Are They Telling You You’re Crazy?

The Hidden Shame of Entrepreneurship—And Why For Some People, It’s Really Frigging Hard to Sell Themselves

The Top 20 Most Original Gift Ideas for That Fucking Writer You Know (No, Not a Moleskine)

DROP THE FLOWERS RIGHT THERE: Six Original Mother’s Day Gifts for Moms Who Are Business Owners

If You’re Wrinkly, It Better Have Been Worth It.