So since I'm in the United States for a hot minute, I have recently acquired a smart phone.

I have three things to say about this:–

…there I was, pretending to be a well-educated, middle-class, nice young lady the other day while perusing Barnes & Noble, when I saw something that immediately fit my photograph-and-upload requirements:– 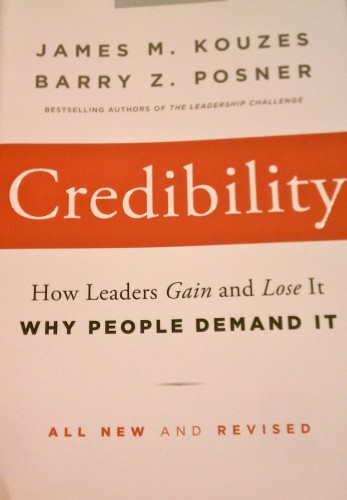 If you're as blind as me, chances are that you can't read that introduction, so I've taken the liberty to pull the first couple of paragraphs for your reading delight:

“As the world falls deeper into economic downturns and armed conflicts, as communities become more heatedly partisan, and as many workplaces show growing signs of disengagement, issues of credibility remain front and central.

In this thoroughly revised and updated edition of their best selling book, Credibility, Jim Kouzes and Barry Posner explore why leadership is above all a relationship, with credibility as the cornerstone, and why leaders must “Say what you mean and mean what you say.” Building on their more than thirty years of ongoing research, Credibility expands on their seminal work The Leadership Challenge, and shows why credibility remains the foundation of great leadership.”

You see, I'm sure these James + Barry chaps are perfectly intelligent gentlemen.

Furthermore, I'm sure they've got some real substance to share. Actually, I think this book is incredibly worthwhile.

But let me ask you something.

Based on that description alone, how much did that book speak to you?

Did that description really stir your juices and make you think to yourself, “Well, now! This is exactly what I've been looking for! THIS is what I need!”–

The topic itself holds a lot of promise, but the way it's presented? Makes me want to slash some tires.

And that's the thing.

This isn't just about book jackets.

You might have the best product out there. You might offer the best service around. You might be the biggest, brightest badass to ever step foot on this humongous ball of rock.

But if the words you choose can't communicate that…

…then it doesn't really matter.

Because you won't be given the opportunity to show it.–

So, how to communicate more effectively through the written word?

Stop focusing on your achievements.

Stop focusing on your qualifications.

Stop talking about yourself.

And start trying to CONNECT.

The word “connect” seems overused and overplayed these days, and as such, comes off as superficial. However, that doesn't mean that the concept itself is any less powerful.

And that, right there, is precisely the key when it comes to developing non-icky sales pages + marketing materials (including your homepage!) that turn your customers on and make them feel uplifted…instead of the alternative.

Do that right, and you won't have to worry about your sales numbers this year.

Or having your customers slam their heads into hot bowls of Spaghetti O's.

Thank god, because that shit would be awkward.

I'm off to go wash my mouth out with soap.

Because then I'd be forced to take a picture of it and upload to Facebook.

And with my luck, someone will text me right at that moment, causing that annoyingly optimistic fairy princess ringtone to sound, and then I'll be the asshole getting electrocuted.

And then some app will launch where some deaf guy pops his head out of the damn phone, points at me, and laughs the entire time.

Top 25 Signs You Need to Make a Change, Gain Self-Respect and/or Say No To Busch Light

Good Things Come to Those Who Wait for No One

“Do I Really Need Three Packages / Tiers / Levels for Selling My Online Course?”

Does Risk Really Equal Reward? Only If You Redefine “Risk”

Our * Book * Comes * Out * TOOOMORRRROWWWW— Plus a ~Secret Excerpt~ to Download and Read! 🤩

Client Weird About Your Contract? Say This and They’ll Happily Sign (While Probably Hugging You)

Shattering the Current Model of Reality

If You’re Nervous About Pulling the Trigger, Clap Your Handsssss!

The Case For Charging Good Money (Featuring an $800 Example)

“I Don’t Know What I Want to Dooooo, And I’m Kinda Confused, and I’m Feeling Like a Flakey Little Fruitcake, Ash!”

How to Get on the Phone With a Client and Deliver a Stutter-Free Pitch Like a Goddamn PRO.

I Brought 20 Hookers to Central America on Business.